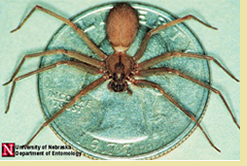 Brown recluse spiders are a very common insect pest in West Tennessee and North Mississippi. This area lies directly in the middle of the geographical distribution of these creatures in the country. Brown recluse are different than other spiders, because they actually prefer living in the same environment as we do and will actually move into and reproduce inside a structure versus the more common wolf spiders, who live outside and happen to come inside in their search for food. For identification purposes, the most visible characteristic of brown recluse is the "violin" shaped marking on the part of the body which the legs are attached to. They will range in color from dark brown, light brown to a light tan color. Wolf spiders, often mistaken for brown recluse spiders, have stripes running down their backs.

Brown recluse and wolf spiders are both considered hunting spiders, which means that instead of sitting on a web waiting for prey, they actively search out their food sources. Interestingly enough, it has recently been found that the preferred food source of brown recluse spiders is dead insects. This is easily demonstrated in the field by the observation that if you catch one spider on a glue board, you will catch more than one in an instance of infestation, as the spiders on a glue board serve as bait for the other spiders!

Reducing clutter is necessary for successful control and reduces places for the spiders to hide. Failure to eliminate clutter will cause treatment failure. Brown recluse spiders also live behind walls, in wall voids, and in infested garages, attics, basements, and crawl spaces. The spiders and their distinctive shed skins are often found between joists, sills, and rafters, as well as under insulation. In living areas, they often inhabit crevices behind and beneath beds and furniture, closets, clothing, shoes, and stored items. When sorting through boxes or materials, wear long sleeves and gloves to avoid being bitten. Brown recluse spiders also reside above suspended ceilings, behind baseboards and woodwork, and within heat ducts and registers.

Outdoors, the spiders may be found in barns, sheds, woodpiles, and under anything lying on the ground. Migration indoors can be reduced by moving firewood, building materials, and debris away from foundations. Sealing cracks and holes in a building's exterior can further help to keep spiders and other pests outdoors. Some of the more common entry points for brown recluse spiders include gaps under doors, vents and utility penetrations, beneath the lowermost edge of siding, and where eaves and soffits meet the sides of buildings. Outdoor populations of brown recluse spiders are less common in the northern portions of its range. 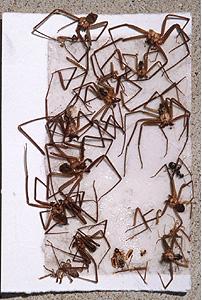 Precautions should be taken to lessen the chance of being bitten. Beds should be moved away from walls, drapes and other furnishings, and skirts and bedspreads removed to break contact with the floor. You should thoroughly check your bed before lying down. Shoes and clothing should also be kept off floors, or at least shaken well before wearing. Remove excess clutter and store seldom-used items in plastic storage containers. There may be comfort in knowing that Brown Recluse spiders are not aggressive, and will only bite when they are threatened, usually when humans accidentally contact them in shoes, clothing, or in bed.